I Flew My Dog to Costa Rica

By nosaraL1vingNovember 26, 2016Uncategorized
No Comments 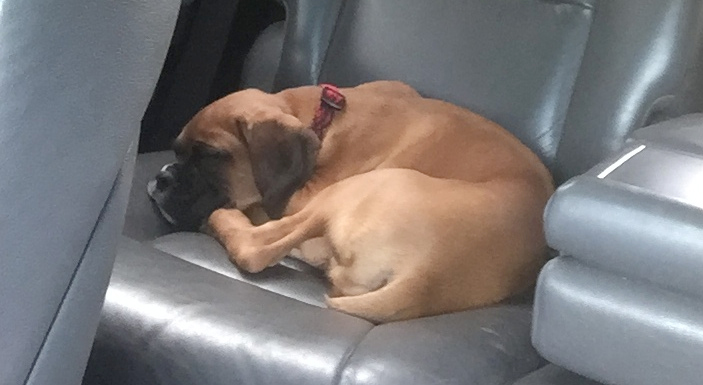 Many people who plan on moving to Costa Rica wonder about bringing a pet with them. I’ve now done it twice.  I am still not an expert, but here is my story. Back in 2001, I brought a two year old Boxer with me when I moved to Nosara. It was relatively easy. I remember having to get documents signed off by my vet in California that verified the dog’s shots were up-to-date and then I had to send that document to Costa Rica Consulate in LA to get stamped. This time around it was a bit easier and I didn’t have to mail anything to the CR Consulate.

I had a trip planned to North Carolina to visit my sister in late October. A few weeks before the trip I did an Internet search for ‘puppy Boxers’. We’ve had a few Boxers over the years and were looking for one to fill the hole in our hearts left by our last Boxer that passed away about a year ago. We hadn’t had any luck finding a Boxer litter in Costa Rica, so I tried NC. I found a very reputable breeder that lived only one town over from where I was going near Ashville, NC. The pups in this litter were old enough to take home and when the breeder sent me photos of the available pups, it was love at first site. After securing my pup, which would be later named ‘Dempsey’, I had a short amount of time to get my plan together. I looked at Delta Airline’s website for pet restrictions and saw that I could bring the puppy on board with me in a small crate that would have to fit under the seat in front of me. The added cost was $125. Good thing Dempsey is still a pup, because Delta does not let snub nose dogs (Boxer, Bulldogs, Pugs, etc) fly underneath the plane anymore, no matter what their size. I then ordered a ‘soft crate’ on Amazon that was airline approved. I was now only about 10 days away from my trip. The next step was to get the pup’s travel documents in order. Thank goodness, the breeder I chose was the most helpful person ever and got the travel docs signed and stamped for me. I downloaded the “Veterinary Health Certificate for the Export of Dogs and Cats from the United States of America to Costa Rica” form (yes, that form actually exists) and e-mailed it to her. The breeder’s vet filled out the form stating the pup’s vaccinations, health status, etc. and mailed it (with a stamped return envelope) to The US Department of Agriculture to be stamped and certified and mailed back.  The entire process took about five business days. Here are some points of interest I learned:

So now I’m ready to fly from Liberia, Costa Rica to North Carolina for my visit and to pick up the pooch. The world’s most awesome breeder had e-mailed me copies of the travel documents ahead of time so when I went to the airport in Liberia to depart, I stopped at the  Customs Office and asked for the Head Honcho and showed him the dog’s docs. He told me that everything looked perfect that I only needed to bring the originals with me when I was to return a few days later with Dempsey in tow.

Now in NC, I picked up my new best friend and he was everything I’d hoped for; super cute, playful and yet with a touch of mellow. After spending a few days with him I started to have a few concerns about the trip. For starters, he was only 3.5 months old but was growing at an insane rate. When I first inquired he was about 14 lbs, and now only ten days later he was 18 lbs with three days to go before I return to CR. Would he fit in the little crate I got him? The answer was no… I had to go to PetSmart and buy a bigger model (it was made of vinyl and mesh with a shoulder strap and cost about $50). Oh well. I knew if I didn’t go back to Costa Rica soon, he would not fit under the seat on the plane at all.  My second concern was would he stay in the crate for the 7 hour trip back to Liberia (Ashville to Atlanta and then Atlanta to Liberia)? After all, he is a puppy with a ton of energy. We practiced for three days getting him to stay in the ‘soft crate’ for a few minutes at a time and he wasn’t enjoying the confinement. My genius sister went to the pet store and found an all natural/organic liquid that keeps dog ‘chilled and relaxed’. It is a called ‘Calm Down’.  She said because it is all natural, you can’t overdose the dog, but recommended only an eye dropper dosage every half hour as needed. It worked!!!! He was perfect for the entire trip with nary a peep. In fact, the people sitting next to me on the flight didn’t know I was with pup until we were getting off the plane (which was unfortunate as he let out some deadly gas a few times and I’m sure the lady next to me thought it was me…) . When I arrived at Liberia and was going through customs, the Head Honcho recognized me and came and helped me with my luggage. He took my paperwork with little more than a glance, began petting Dempsey and welcomed me back.

I couldn’t have hoped for an easier trip. Now a month later, Dempsey is a huge part of our family. The little research and planning I’d done ahead of time went a long way, not to mention the super awesome breeder and my all-star sister for their help. Here are some helpful links: